Dissecting the $250 Billion China Deals Trump Got for U.S.

How does $250 billion in deals get sliced?

The White House has unveiled a slew of agreements with China as President Donald Trump seeks to address an imbalance in trade. While Commerce Secretary Wilbur Ross boasted a total of $250 billion in business deals, getting to that figure may require some fuzzy math.

Many of the deals weren’t broken out into separate valuations, while a large number were in the form of non-binding memoranda of understanding or involved agreements with existing Chinese partners.

Boeing Co.’s $37 billion aircraft order consists mostly of previously agreed deals, according to officials with knowledge of the matter. An agreement involving Cheniere Energy Inc. was presented at the signing ceremony as worth $11 billion, though neither company involved announced the value. Other pacts are stretched over lengthy periods, such as a 20-year shale gas and chemical project in West Virginia. 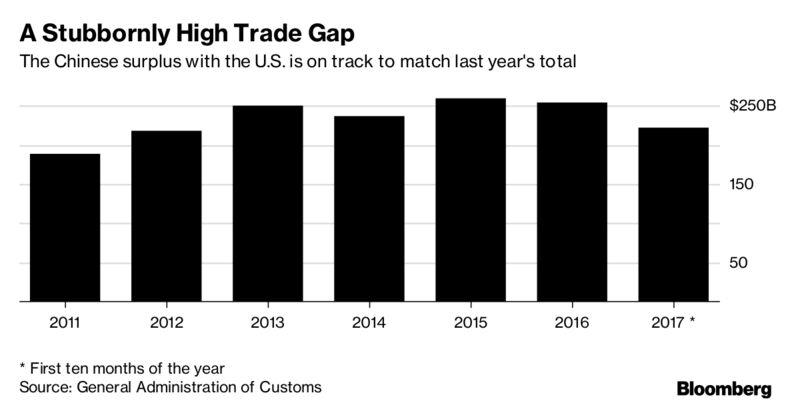 Still, the wave of deals signals the potential for an easing of tensions between the two countries, in addition to an increase in trade for products ranging from helicopters to beef. Here are highlights of what’s been disclosed so far:

Alaska Gasline Development Corp.: a joint agreement to advance a liquefied natural gas project in Alaska, involving the state of Alaska, Sinopec, China Investment Corp. and Bank of China Ltd. The $43 billion project has been in discussion for years, and Alaska Gasline applied for federal approval for the development in April. Exxon Mobil Corp., ConocoPhillips, BP Plc and TransCanada Corp. have been involved in the effort, but have distanced themselves since estimating in 2012 that it would cost as much as $65 billion and take more than a decade to construct.

West Virginia: the state signed an MOU with China Energy Investment Corp. The Chinese company plans to invest in West Virginian shale gas development and chemical manufacturing projects over two decades, according to the state’s Department of Commerce, which did not offer details. The size of the proposed investment is $83.7 billion, larger than the state’s gross domestic product last year of $73.4 billion.

Cheniere Energy: signed an MOU with China National Petroleum Corp. The companies will “continue in-depth discussions” regarding liquefied natural gas projects, according to a press release from the U.S. Department of State.

Air Products & Chemicals Inc.: the industrial gases company and state-owned Yankuang Group Co. intend to form a joint venture to build and operate an air separation, gasification and syngas clean-up system for a $3.5 billion coal-to-syngas production facility. Air Products is currently a supplier to the first phase of the project. Earlier this year, Air Products scrapped its plan to acquire China’s Yingde Gases Group Co. after a private-equity firm swooped in.

Boeing: China Aviation Supplies Holding Co. agreed to buy 300 aircraft worth about $37 billion. An official with knowledge of the matter said the order is mostly for jets that have been agreed upon since 2013 and set to be delivered through 2020. Representatives of Chicago-based Boeing declined to say whether the contracts are new, or rather, old acquisitions that are sometimes made public during heads-of-state visits. China Aviation didn’t respond to phone calls seeking comment.

Chinese airlines have been on a plane-buying spree amid a projection for the country to overtake the U.S. as the largest air-travel market possibly in as soon as five years. The state has previously placed large orders through a centralized buyer before dividing them up among its airlines and leasing companies.

Honeywell International Inc.: contract with Spring Airlines Co., the Chinese budget carrier that flies over 130 routes with a fleet of Airbus A320 planes. The U.S. company is a supplier for the C919, a new single-aisle plane being produced by state-owned Commercial Aircraft Corp. of China Ltd.

Bell Helicopter: the subsidiary of Textron Inc. signed an agreement to sell 50 of its helicopters to Reignwood International Investment Group Co. The company had already ordered 60 choppers, according to Bell Helicopter.

Beef and Pork: JD.com Inc. agreed to buy $1.2 billion of beef from the Montana Stock Growers Association and pork from Smithfield Foods Inc. over the next three years, as part of a deal by the Chinese online retailer to import $2 billion of U.S. goods over that period.

The beef portion, about $200 million, would signal a big increase in the appetite for red meat among Chinese consumers, as shipments remain low due to the limited supply that meets requirements. According to China’s Customs General Administration, the country imported 2.3 billion yuan of beef last year.

The pork deal may not be much help creating jobs at Smithfield’s U.S. factories: The company can’t sell made-in-America sausage, ham and bacon to Chinese consumers because China prohibits imports of processed meat, CEO Kenneth Sullivan said in an interview in March. Smithfield parent WH Group opened an 800 million-yuan factory in central China in 2015 to produce American-style packaged meat products.

Archer-Daniels-Midland Co.: memorandum of understanding with state-owned COFCO Group for the export of U.S. soybeans into China. The U.S. Soybean Export Council said in an email that Chinese companies signed letters of intent to buy 12 million tons of U.S. soybeans valued at $5 billion.

Goldman Sachs Group Inc.: China’s sovereign wealth fund and Goldman Sachs announced a fund to help invest as much as $5 billion in American companies that have existing or potential business connections with China. State-backed China Investment Corp.’s role in the fund could complicate investments in American companies, after the Trump administration in September rejected a China-led takeover of a U.S. chipmaker on national-security grounds. Moreover, Goldman Sachs may only be able to contribute 3 percent of the fund because of U.S. rules regarding banks’ private-equity investments.

Qualcomm Inc.: non-binding MOUs with Chinese smartphone vendors Xiaomi, Oppo and Vivo – all of them current customers – to sell approximately $12 billion in semiconductors over three years. The San Diego-based chip company’s China sales of $14.6 billion accounted for 65 percent of its revenue for the fiscal year ended Sept. 24.

Caterpillar Inc.: cooperative framework agreement with newly formed China Energy Investment Corp. — a combination of Shenhua Group Corp., the nation’s largest coal miner, and China Guodian Corp., one of its top-five power generators. The pact “outlines future agreements” for sales and rentals of Caterpillar mining equipment and other products and services, the U.S. company said in a statement.

Honeywell International: an MOU with Oriental Energy Co. to cooperate on five propane dehydrogenation projects in Chinese cities. Honeywell announced in May that two Oriental Energy subsidiaries had licensed its technology to begin producing propylene.

American Ethane Co.: the Houston-based exporter of liquid ethane entered into a $26 billion, 20-year contract with Nanshan Group, according to a statement on AEC’s website.