The House tax-writing committee began four days of work Monday to hammer out the details of the Republican tax cut plan. Here are the latest developments, updated throughout the day:

House Republicans on the Ways and Means Committee adopted a package of changes offered by Chairman Kevin Brady — including a measure to limit the so-called carried interest tax break — by a party line vote of 24-16. Brady had presented his committee with a series of last-minute changes to the House tax bill. The new limit on carried interest would triple the length of time assets would have to be held to qualify for the capital gains rate of 23.8 percent.

Brady had said Monday morning during a CNBC interview that he intended to attach a two-year holding period to carried interest. The tax break is used widely among private-equity managers, venture capitalists, certain real estate investors and hedge fund managers.

Carried interest is the portion of an investment fund’s profit — usually a 20 percent share — that is paid to investment managers. Currently, tax authorities treat that income as capital gains, making it eligible for the 23.8 percent — on gains from assets held for a year or more. The top individual income tax rate is 39.6 percent.

The late changes provoked furious reactions from Democrats after they appeared five-and-a-half hours into an expected four-day markup.

“This is disgraceful. This has been just the worst kind of process,” Representative Sander Levin of Michigan, a former chairman of the panel, told Brady in a tense back-and-forth. “You’ve made a mockery out of this committee. A mockery.”

Other provisions that Brady proposed Monday evening include modifications to the tax treatment of payments for employer-provided dependent care and the earned income tax credit program. His amendment would also decrease the number of universities facing a proposed excise tax of 1.4 percent. Under the change, institutions with endowment assets of at least $250,000 per student would face the tax — up from an original $100,000 level.

Brady said the amendment also “better tailors” international base erosion rules that are aimed at preventing multinational corporations from shifting their earnings overseas to lower-tax jurisdictions.

“As the legislative process moves forward, we will continue to work to ensure that the international tax rules operate to appropriately protect the U.S. tax base while making America one of the best places in the world to hire, invest, and do business,” Brady said in a statement.

On the other side of the Capitol, Senate Democrats are scheduled to meet Tuesday with White House Legislative Affairs Director Marc Short and top economic adviser Gary Cohn. — Sahil Kapur, Anna Edgerton and Margaret Talev

There are no plans to add the repeal of the Obamacare individual mandate to the House tax bill, according to a person who is helping write the law. While the situation is still fluid, if that provision is added, it would most likely be added to the Senate version, said the person, who asked not to be named when speaking about internal discussions.

House Speaker Paul Ryan said on “Fox News Sunday” that House Republicans were considering adding the mandate’s repeal to the bill. Doing so is estimated to raise $416 billion over a decade, which could be used to offset tax-rate cuts. President Donald Trump has posted Twitter messages supporting the move.

But party leaders worry that reopening the politically painful Obamacare debate would cost them crucial votes on a tax bill. A “skinny” repeal of Obamacare that scrapped the individual mandate failed in July to pass the Senate after three GOP senators defected.

Brady said in a statement Monday night that he and others are “working on common-sense temporary and targeted relief” from taxes imposed by Obamacare, but suggested the House will act on them separately “before the end of the year.” — Anna Edgerton

Senate tax writers are planning on keeping the mortgage interest deduction limit at $1 million, unlike the House legislation released last week that set a cap of $500,000 for new home sales, according to a person familiar with the emerging Senate bill.

The Senate Finance Committee is still on track to introduce something shortly after its counterpart panel in the House — the Ways and Means Committee — finishes work on their version of the legislation later this week, said the person, who asked not to be named because discussions are private. The Senate bill is also likely to include measures to drop the corporate rate to 20 percent and give relief to more pass-through businesses, the person said.

There “isn’t any doubt” the Senate bill will have key differences with the House, but a top goal is keeping the House bill’s new corporate tax rate of 20 percent, Senate Finance Chairman Orrin Hatch, a Utah Republican, said in an interview.

Hatch wouldn’t specify his plans for the mortgage interest deduction. However, when asked whether the panel would keep the $1 million limit intact, he said: “Well I don’t know. It depends on how much feeling there is about moving it back, but I’m not sure.” — Laura Litvan

Even if House Republicans are able to keep their members in line this week and next, another threat to passage may be taking shape across the Capitol: Senate Republicans are gearing up to release their own tax bill, which is likely to have different provisions and create fresh points of contention. 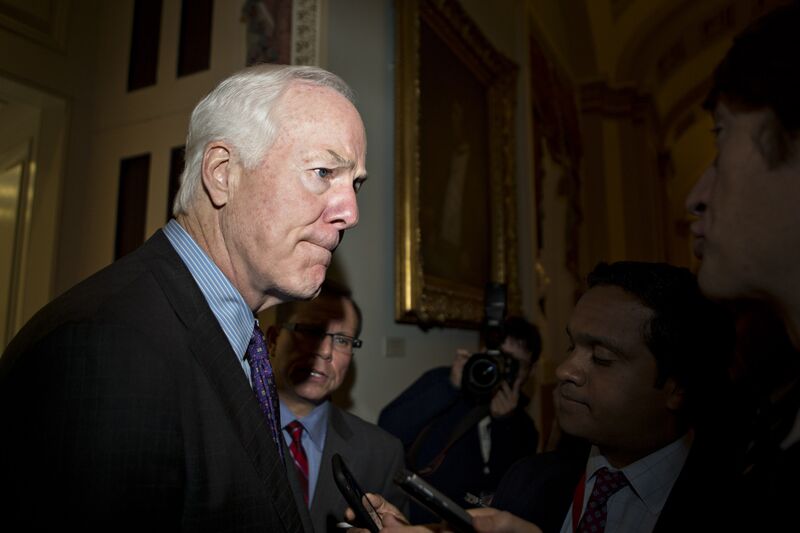 Senator John Cornyn of Texas, the No. 2 Republican leader, said in an interview Monday the chamber’s tax-writing committee wouldn’t be using the House bill as a starting point.

“We’re going to start from scratch, really. We wish them well and I think a lot of what they’ve tried to do is kind of instructive for us,” Cornyn said. “It’s helpful for us to have them go first to see the kind of issues that come up and anticipate those in the Finance Committee markup. But I’m still pretty optimistic we’ll get this done before Thanksgiving.”

Senate Finance Chairman Orrin Hatch said he plans to release a tax bill for his committee to consider “once the House Ways and Means Committee completes its work, hopefully toward the end” of the week. — Laura Litvan and Steven T. Dennis.

House Ways and Means Chairman Kevin Brady told his panel it faces “a monumental challenge” this week: “coming together to fix a tax code that has become just as broken, complex and unfair as the one President Reagan and Congress overhauled in 1986.”

In his opening statement, Brady said the bill, which would cut tax rates for corporations and certain closely held businesses as well as for individuals, would spur economic growth. He said that by removing breaks for special interests, the bill would make the tax system fairer for all.

He added that although members had requests that weren’t ultimately included in the tax legislation, “I can assure you this is not the last tax markup our committee will ever hold.”

“The legislation, which was crafted solely by the majority party behind closed doors and which was not made public until late last week, puts the wealthy and well-connected first, while forcing millions of American families to watch as their taxes go up,” Neal said. — Sahil Kapur

Democrats called for slowing down the House Ways and Means Committee’s consideration of its tax bill — saying lawmakers need to consider the legislation’s provisions for stemming tax avoidance.

“We gather at noon today,” said Representative Lloyd Doggett, a Democrat on the Ways and Means panel. Yet there have been “less than 100 hours of evaluation of the bill,” he said.

On Sunday, an international journalism group published reports that alleged tax avoidance by U.S. multinational companies including Apple Inc. The reports, based on documents obtained from an offshore law firm, also linked high-ranking officials in Trump’s administration to holdings in offshore tax havens such as the Cayman Islands and Bermuda.

Democrats and tax-advocacy groups have called for delaying consideration of the tax bill pending more disclosures. On Monday, a pair of Democratic senators said the bill would do too little to stem aggressive tax avoidance.

“If you deduct medical expenses or student loan interest from your taxable income, the Republican plan comes after your wallet,” Democratic Senators Chuck Schumer and Ron Wyden said in a joint statement. “But if you stash your billions in secret bank accounts overseas, their plan gives you the green light to keep doing what you’ve been doing.”

Schumer is the Senate minority leader. Wyden is the top Democrat on the tax-writing Senate Finance Committee. — Lynnley Browning and Sahil Kapur

The carried interest tax break that provides an advantage for investment managers would be revised under changes the House’s chief tax writer says he’s planning.

Carried interest is the portion of an investment fund’s profit — usually a 20 percent share — that is paid to investment managers. Currently, tax authorities treat that income as capital gains, making it eligible for a tax rate as low as 23.8 percent — on gains from assets held for a year or more. The top tax rate for ordinary income is 39.6 percent. The change Brady’s proposing would double the length of time an asset would have to be held to qualify for the lower rate.

“We will put in the two-year holding period on carried interest to make sure it’s really focused on those long-term, traditional real estate partnerships,” Brady said on CNBC.

A group that represents private equity funds said that making the change would put economic growth at risk. “Alterations to the treatment of carried interest — and all other capital gains — discourages investment and jeopardizes economic growth,” Mike Sommers, the chief executive officer of private equity industry group the American Investment Council, said in an emailed statement.

Trump had made an issue of the special tax benefit during his presidential campaign. He labeled some hedge fund managers as “paper pushers,” who are “getting away with murder.”

Many hedge funds don’t benefit from the tax break. That’s because many hedge funds hold assets for a short period of time — especially those that use computer-driven strategies to buy and sell securities thousands of times a day. Hedge funds could still get the break under the change if they held assets for two years or more before selling. — John Voskuhl and Melissa Mittelman