Congressional Republicans kicked off the final leg of their six-week legislative sprint to overhaul the U.S. tax code and deliver a major policy victory for President Donald Trump before year’s end. The House approved the bill Tuesday and Senate leaders intend to vote on it Tuesday evening.

For a summary of the bill’s contents, click here.

Here are the latest developments, updated throughout the day:

House Majority Leader Kevin McCarthy said the House will have to take another vote on the tax bill Wednesday morning, after the Senate removes or changes relatively minor provisions that don’t comply with the chamber’s budget rules. 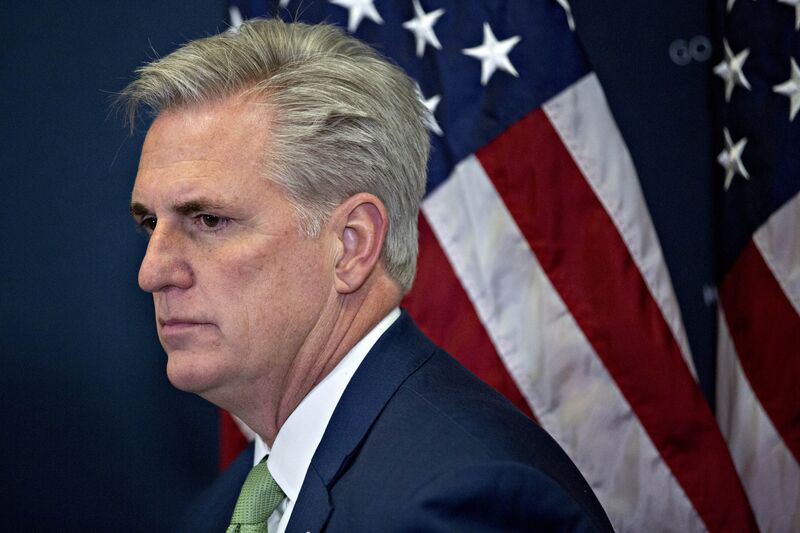 The issue is seen as a procedural hiccup, rather than anything that could jeopardize the legislation’s passage. The House passed the bill earlier Tuesday on a vote of 227-203.

The Senate parliamentarian has determined that several provisions in the Republican tax bill would run afoul of Senate rules, according to a statement Tuesday from Senator Bernie Sanders, a Vermont independent.

One of the provisions in question would have allowed parents to use tax-advantaged 529 accounts to cover expenses of home-schooling their children, the statement said. Another is related to the schools that would be excluded from a new excise tax on private universities’ endowments above a certain threshold.

“In the mad dash to provide tax breaks for their billionaire campaign contributors, our Republican colleagues forgot to comply with the rules of the Senate,” Sanders said. “It is our intention to raise a point of order to remove these provisions from the conference report and require the House to vote on this bill again.”– Allyson Versprille and Laura Litvan

GOP Senate leaders plan to take up tax-overhaul legislation immediately Tuesday — where its final passage is all but assured.

The bill, dubbed the Tax Cuts and Jobs Act, was approved by 227 to 203. Only 12 Republicans — mostly from high-tax states where some taxpayers stand to see higher bills — voted against the measure. 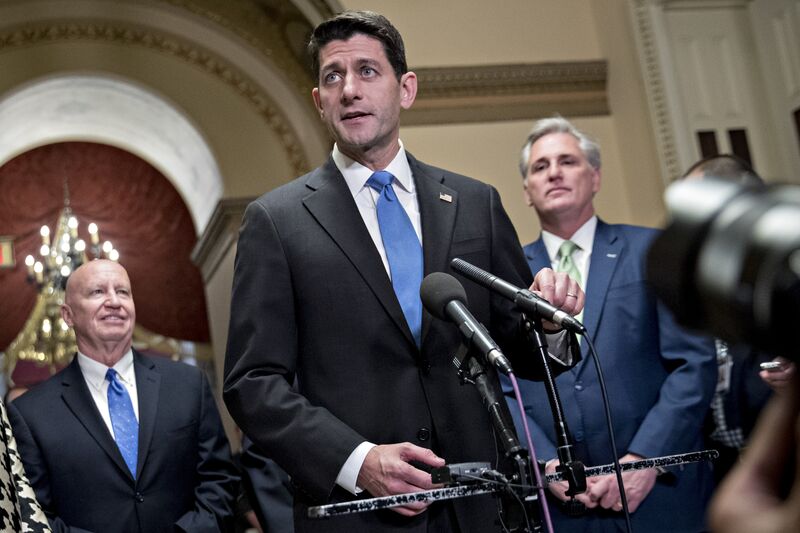 “Today, we are giving the people of this country their money back,” House Speaker Paul Ryan said just before the votes were cast. He called the measure “real relief” for Americans who have struggled during what he called “the worst recovery since World War II.” — Anna Edgerton

House Republicans have enough votes — 217 — to pass their sweeping tax overhaul, which will a deliver a deep, lasting cut for corporations and temporary benefits for individuals.

The vote is still ongoing. After it concludes, the bill will move to the Senate for debate and a vote Tuesday evening, where it’s all but assured to pass.

The legislation — which has scored poorly in public opinion polls so far — will immediately become one of the biggest issue in the 2018 elections that will determine whether the GOP retains its majorities in Congress. — Catherine Dodge and Anna Edgerton

House Speaker Paul Ryan brushed aside polls showing the GOP tax bill is unpopular and has many Americans believing their taxes will increase.

“No concerns, whatsoever,” Ryan said Tuesday during a press conference ahead of the scheduled House vote on the bill, in response to a question about whether the tax overhaul will translate into a political win for Republicans. “If people are out on TV telling mistruths, disguising the facts of this thing, that’s going to make it unpopular.”

Various analyses have shown that the bill’s temporary individual tax cuts — which expire in 2026 — will provide initial relief across all income groups, though higher earners would generally get bigger benefits. Some individual taxpayers stand to see higher tax bills because of specific provisions — including limits on deductions and personal exemptions — that might affect them.

Once American wage earners see their withholding tax amounts adjusted, and the economic growth that Republicans say will result from the permanent corporate tax cut, they’ll start to support the overhaul, according to Ryan. He added: “Results are going to make this popular.”

It’s not popular now. Half the public thinks they’ll pay higher taxes under the Republican overhaul, according to a Monmouth University poll that surveyed respondents from Dec. 10 to Dec. 12. Just 14 percent say they’ll get a tax break under the plan, while another quarter say their tax bill will probably stay the same. Other polls conducted in the last few weeks have shown that a majority of Americans disapprove of the proposed changes and think they benefit the rich at the expense of the middle class.

A study released Monday by Congress’s official scorekeeper, the Joint Committee on Taxation, found that the bill would cut the average tax rate for middle-income people by about 1.3 percentage points in 2019, while those who earn more than $200,000 a year would see larger average reductions.

Ryan emphasized the tax relief the bill will provide for middle-class families, small business and workers. “This is the greatest example of a promise being made and a promise being kept,” said Ryan.

The House is scheduled to begin voting on the bill early Tuesday afternoon.

After the Houses sends the legislation over, the Senate will begin to debate it and hold a vote Tuesday evening, according to Senate Majority Leader Mitch McConnell.

“Congress is standing at the doorstep of an historic opportunity,” McConnell said during opening floor comments. — Anna Edgerton and Catherine Dodge

The House is poised to approve GOP tax legislation Tuesday — with plans to hold a vote around 1:30 p.m., according to a Republican leadership aide who asked not to be named because the details are private.

But Democratic challenges could still provide some drama — or at least, a brief delay — after the bill heads to the Senate.

Senator Ron Wyden, the top Democrat on the tax-writing Senate Finance Committee, said his members have been scouring the bill for potential provisions that could be challenged on the Senate floor because they don’t relate to federal revenue or spending, or because they would add to the deficit after a decade — violating the so-called Byrd rule.

“We’ve been at it for days and I think it’s extremely important,” Wyden said Monday evening. In practical terms, a successful challenge could force the bill back to the House for reconsideration — without the offending portions. The delay would be only temporary.

A provision that would have repealed a prohibition against tax-exempt nonprofits, including churches, supporting or opposing political candidates was dropped from the final bill because of Byrd rule concerns.

Senate Majority Whip John Cornyn of Texas didn’t rule out the possibility of other issues involving the rule. “We’re still talking to the parliamentarian about that,” Cornyn said, referring to the Senate adviser on rules and procedures. “So we simply don’t know for sure. But that’s what this process is designed to tell us.” 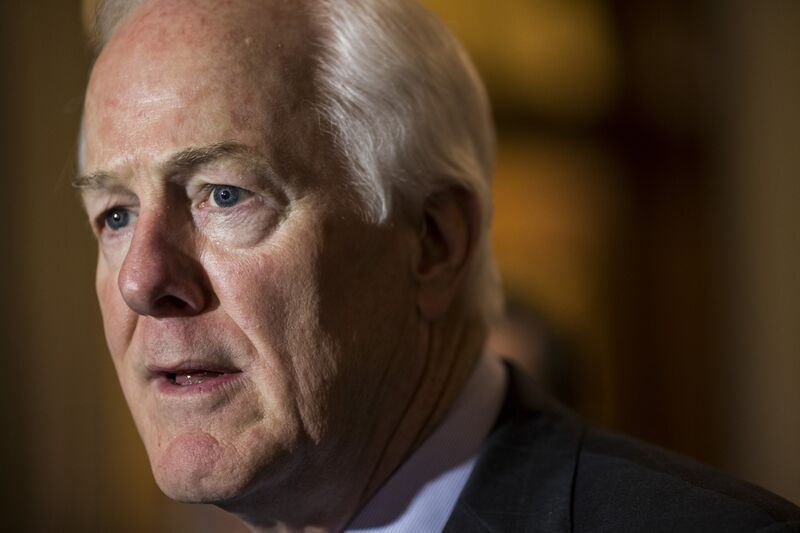 Cornyn predicted that the House would send over the tax bill early Tuesday afternoon. “We’ll pass it either tomorrow night or Wednesday morning,” Cornyn said Monday.

Senate rules require 10 hours of debate on the bill, divided equally between Republicans and Democrats. But either side can elect to give up some of its time, and Republicans may do so to speed passage.

In the longer term, Democrats are warning that future legislation will be needed to correct drafting errors or other technical issues in the tax bill. The top Democrat on the tax-writing House Ways and Means Committee, Richard Neal of Massachusetts, said Monday evening that he would be seeing the Rules Committee frequently because “there are going to be a series of technical corrections.” Neal cited the fast pace of the legislation — which was introduced in the House a little over six weeks ago — as one of the reasons for future fixes.

His fellow Democrats on the Rules Committee spent more than three hours picking apart the process that they said shut them out of any real discussion at every legislative step.

Ways and Means Chairman Kevin Brady acknowledged future work to be done on the U.S. tax code, including changes to retirement savings and tax provisions for start ups.

"We’re not done, by the way,” Brady said. “I think there are various ways to improve this.” 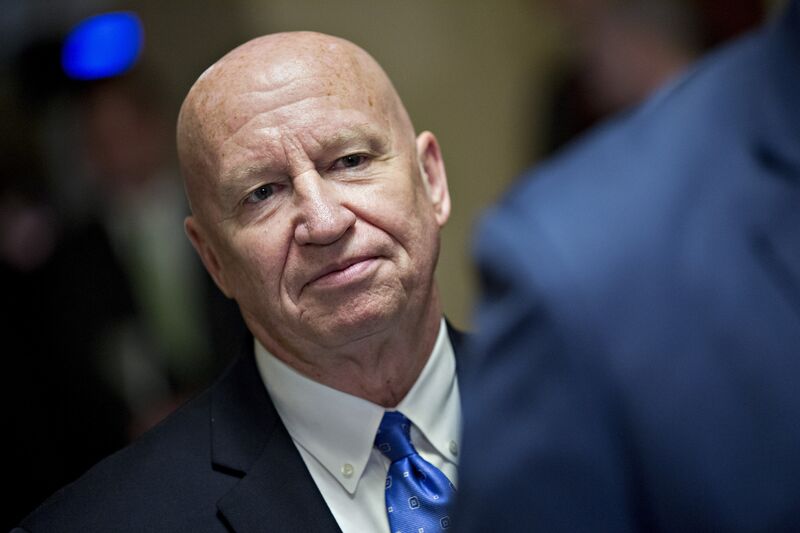 Despite their slim majority in the Senate, GOP leaders appear to have won over enough potential dissenters in their ranks. Republican Senator Susan Collins of Maine was one of the last to say she supports the bill on Monday, following Senator Bob Corker of Tennessee and Marco Rubio of Florida declaring their support last week.

Meanwhile in the House, a handful of Republicans have said they won’t support the final bill, including John Faso of New York, Dana Rohrabacher of California and Leonard Lance of New Jersey — but the “no” forces lack sufficient numbers to sink the bill. Most of the House GOP dissenters are from high-tax states and are concerned that the bill’s $10,000 limit on individuals’ state and local tax deductions will raise taxes on their middle-class constituents.

Trump, his advisers and Republican leaders continue to say the tax plan would help the middle class the most. But studies, including one Monday from Congress’s official scorekeeper, the Joint Committee on Taxation, have found that lower income earners will actually see a higher tax burden by 2027, while high earners will see a more enduring benefit. — Anna Edgerton, Kaustuv Basu and Laura Litvan

Here’s What Happened on Monday: