Takeda Pharmaceutical Co. slumped the most in almost five years after the Japanese company increased its bid for Shire Plc to about 46 billion pounds ($64 billion), as the drugmakers sought more time to agree on a deal.

Takeda’s shares tumbled as much as 9.3 percent in early Tokyo trading even after Shire’s board said in a statement it’s willing to recommend to Takeda’s fifth proposal to its shareholders. Shire also agreed to extend a deadline required under U.K. takeover rules to May 8 for the companies to continue talks. Takeda confirmed the proposal in a separate statement. 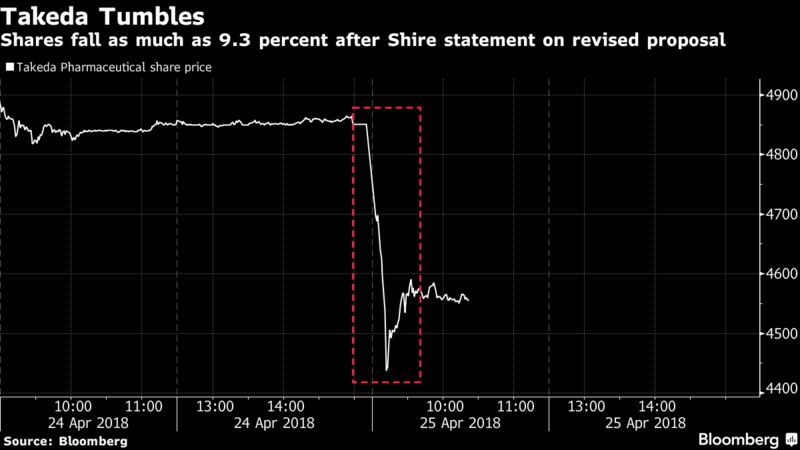 The Japanese company is offering the equivalent of 49 pounds a share, including 27.26 pounds in stock and 21.75 pounds in cash, Shire said in the statement. That’s a 60 percent premium to Shire’s closing price on March 27, before Takeda disclosed its interest in the U.S. drugmaker.

The stock part of the new proposal comprises 0.839 new Takeda shares. With the slump in the company’s shares Wednesday, Takeda would need to offer more stock, creating further dilution for its shareholders.

“The market is seeing this acquisition as negative,” said Mitsushige Akino, an executive officer with Ichiyoshi Asset Management Co. in Tokyo. “It is too big. Takeda might not be able to handle it.”

A completed deal would be the biggest by a Japanese company of an overseas target, and launch the two companies into the top ranks of global pharmaceutical giants. Still, some investors have been skeptical about Takeda’s ability to go after a drugmaker that’s now larger than itself, and have raised concerns about the risk of taking on more debt.

Takeda has been ramping up its takeover ambitions as Chief Executive Officer Christophe Weber faces challenges in ensuring the future of Japan’s biggest drugmaker. With few late-stage experimental drugs in its own pipeline and a shrinking home market, Takeda needs lucrative new therapies. 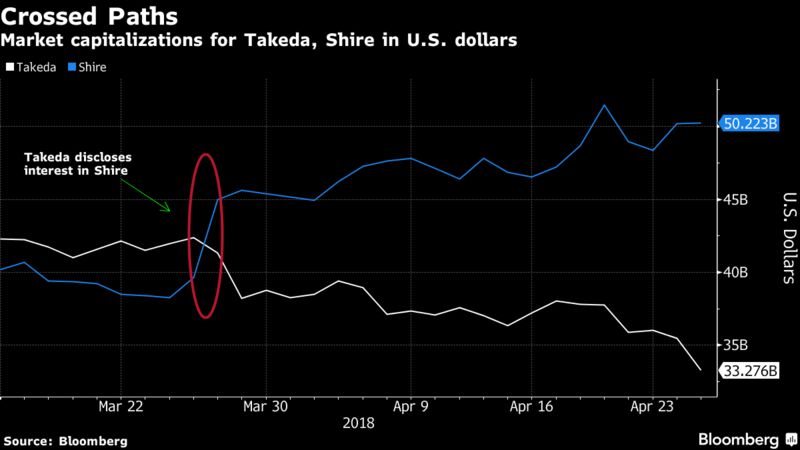 Takeda, which has seen its market value slide to $33 billion since announcing its interest, is taking on a much bigger rival. Shire’s shares, meanwhile have soared 28 percent, giving the company a market capitalization of about $50 billion. That may present a higher hurdle for financing a transaction.

Takeda may take a hit if it borrows tens of billions of dollars to pay for the deal. Japanese banks that are planning to lend to Takeda for the transaction must carefully consider how they should hedge their own risks, according to S&P Global Ratings. The agency has said the acquisition could hurt Takeda’s credit score, while investors have begun to demand higher premiums for holding its debt.

The banks could hedge risks by organizing a syndicate of banks, requiring collateral or making the terms of the loans very short, according to Ryoji Yoshizawa, an S&P analyst in Tokyo. Japan’s three biggest banks intend to offer about 1 trillion yen each in bridge loans to Takeda, the Nikkei reported.

Takeda last week raised its offer to 47 pounds a share and lifted the cash portion of the bid after three prior proposals were rejected.