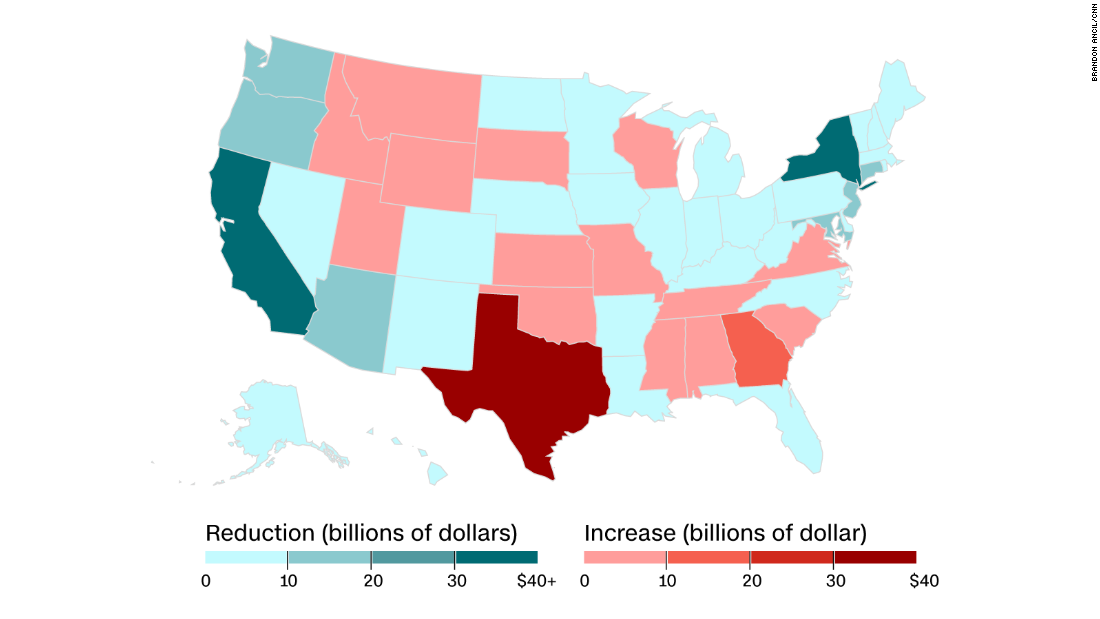 (CNN)Senate Republicans continue to sound optimistic about their chances of passing their last, last-ditch attempt to repeal and replace Obamacare before their window to do so closes at the end of the month. (I’m more skeptical.)

But even if Republicans do manage to squeak through the legislation being championed by Sens. Lindsey Graham of South Carolina and Bill Cassidy of Louisiana — and it will be a squeaker — it’s possible they will create even more political problems for themselves on health care than they currently face.
New data from an Avalere Health analysis suggests that Graham-Cassidy — if passed in its current form — would cut federal money to states by $215 billion over the next decade. All told, 34 states would see cuts to the amount of federal dollars they are getting for health care under the Affordable Care Act, while 16 would see an increase.
This map — created by CNN dataviz wiz Sam Petulla — shows how much each state would stand to gain or lose in federal dollars if Graham-Cassidy passed:
Big states are, not surprisingly, affected the most. Texas, which rejected Medicaid expansion under Obamacare, would see an increase of $35 billion in federal dollars headed its way. California and New York, two massive states whose governors accepted the Medicaid expansion, would see dips in funding of $78 billion and $45 billion, respectively.
Those are the extremes. It’s the other 47 states — or at least the 34 that would receive less federal dollars under Graham-Cassidy — that should worry Republican politicians. Among the states that would lose billions in federal funding: Pennsylvania ($6 billion), Ohio ($9 billion), Colorado ($6 billion) and Michigan ($8 billion).
Those are all states Trump won in 2016 — and states he would need to win again in 2020. There are also a slew of competitive House and Senate races in those states in 2018. If, for example, Republicans suffered major losses in their House ranks in Ohio, Pennsylvania and Michigan, their majority in the House could be at stake.
The Avalere analysis is not alone in concluding what the effect Graham-Cassidy would have on states. While the Graham-Cassidy legislation hasn’t been scored by the Congressional Budget office, CNN’s Tami Luhby expertly notes:
“(CBO’s) analysis of an earlier Senate repeal bill showed that a similar restructuring of the traditional Medicaid program and the gradual winding down of Medicaid expansion would reduce federal spending by $772 billion by 2026, compared to current law. Also, the earlier bill would have left about 15 million fewer people insured under Medicaid at that time.”
And because of the way the block grants of money are allocated in Graham-Cassidy, even in states that would see initial gains — largely those that did not accept Medicaid expansion — the long-term prognosis would be far less rosy.
What we know from the 2010 and 2014 midterm elections is that health care is an issue that voters vote on. What we know from human nature is taking away — or significantly altering — a benefit people currently have (even if it’s not a benefit they absolutely love) carries massive political peril.
Senate Republicans — and Trump — seem to believe they face more political backlash if they can’t make good on the promise they made repeatedly over the last seven years to repeal and replace Obamacare.
The map above, however, suggests passing Graham-Cassidy could be a pivot point in the battle for Congress next November — and not in a good way for Republicans.