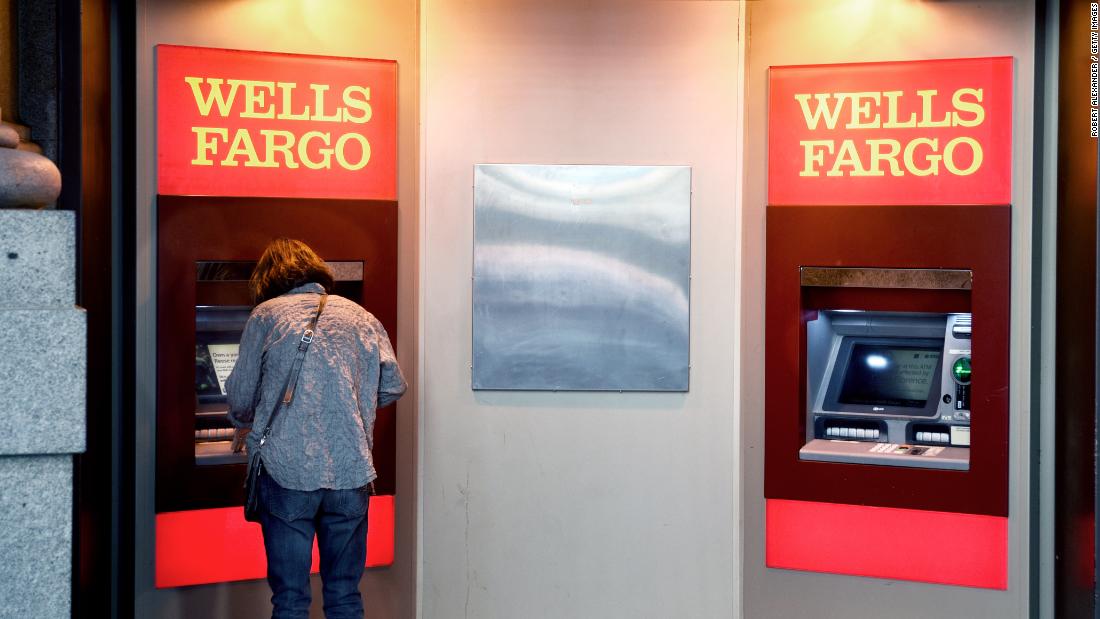 New York (CNN Business)Wells Fargo customers, frustrated by a cascade of scandals, could yank tens of billions in deposits from the bank over the next year.

The report, based on an online survey of 4,000 Americans, projected that Wells Fargo could lose $93 billion in deposits over the next year. That would represent about 7% of the bank’s total deposits.
Cg42 found that a growing number of Wells Fargo customers are fed up with the nation’s third-largest lender. Their top complaint is that their bank was engaged in “dishonest, unethical or illegal practices.” Others bemoaned that Wells Fargo is trying to sell them products they don’t want or need.
There’s no doubt that the frustrations are a direct result of the nightmare that began two years ago at Wells Fargo, according to Steve Beck, managing partner at cg42.
“The bad behavior is coming home to roost,” Beck told CNN Business. “Customers are saying, ‘We’ve had enough. It’s time to move on.'”
Wells Fargo’s reputation has been tarnished by a series of shocking admissions. The bank had said it created up to 3.5 million fake accounts, charged customers mortgage fees that weren’t necessary and auto insurance they didn’t need. Some Wells Fargo borrowers even had their cars repossessed as a result.
About 12% of Wells Fargo’s customers are expected to move their money elsewhere over the next year, cg42 estimates. Factoring in new business Wells Fargo is likely to win, the bank’s net deposits could decrease by a net $75 billion. That would translate to a loss of $2.1 billion in sales.

During the first full year after the Wells Fargo scandal erupted, the bank’s deposits increased nearly 4% to $1.31 trillion at the end of the third quarter of 2017. However, that trend has reversed more recently — despite the strong economy.
Wells Fargo reported $1.27 trillion in deposits at the end of the second quarter, down $30 billion, or 2%, from the year before. Much of that decline was led by a drop-off in deposits from business clients. Wells Fargo pointed to actions it had to take to comply with penalties imposed by the Federal Reserve that prevent the bank from growing.
Wells Fargo’s total consumer and small business banking deposits fell 1% last quarter from the year before and are only slightly above levels in September 2016 when the bank reached a settlement for the fake-accounts scandal. Mortgage applications dropped 19% last quarter from the prior year.
Other analysts see little evidence that Wells Fargo’s consumer business is suffering.
For instance, downloads of Wells Fargo’s mobile app have rebounded relative to rival banks since late 2017, according to UBS.
Wells Fargo’s app performance is “encouraging” and does not suggest “deteriorating business momentum” in retail banking, UBS analyst Saul Martinez wrote to clients in late September. UBS is calling for Wells Fargo to generate 2% compound annual revenue growth between 2018 and 2020.
In a statement, Wells Fargo said it is “listening to our customers, understanding their needs, addressing any concerns and providing them with exceptional service and guidance to help them succeed financially.”
“Our focus is on restoring trust with all of our stakeholders and building a better Wells Fargo,” the bank said.

For many years, Wells Fargo was the face of “cross-selling” — the industry practice of deepening relationships with customers by providing them multiple products. People who had Wells Fargo bank accounts would be offered loans, insurance and other products that generate far more revenue.
Of course, Wells Fargo had to dial back cross-selling because of its multitude of scandals. That situation would be made even more challenging by an exodus of customers.
“Fraudulent accounts, charging for things you didn’t provide — these are all actions that it doesn’t take a PhD to understand,” said Beck. “The average consumer can easily relate. And they realize if they did this they would be in jail or bankruptcy.”
Wells Fargo isn’t alone in facing a potential loss of customers.
Big banks are projected to lose $344 billion in deposits over the next 12 months due to customers switching, cg42 found.
Bank of America customers complained about needless fees and poor customer service. About one in four Bank of America customers are at risk of leaving the bank, cg42 found. The report predicted that Bank of America (BAC) will suffer a loss of $87 billion in deposits over the next year.
Bank of America did not respond to a request for comment.
Other major banks could enjoy an influx of new customers. Citibank (C) and TD Bank (TD) are projected to add $1 billion and $4 billion in deposits, respectively, according to cg42.

For decades, Americans stuck with their banks because it seemed like too much of a hassle to switch, especially if they had multiple accounts or other business there.
But that thinking has shifted. The cg42 survey found that customers are more willing to switch due to technological advances and increased competition, including from online-only banks.
Young people are especially open to new players to the banking world. At least 20% of Millennials said they’d be willing to switch to Amazon (AMZN), PayPal (PYPL), Apple (AAPL) or Google if those companies offered banking services.
Wells Fargo has sought to defend its retail banking franchise from reputational damage. In 2016, the bank replaced longtime CEO John Stumpf with Tim Sloan, a three-decade veteran of the company. Wells Fargo also installed new directors and replaced the wildly unrealistic sales goals that encouraged the bad behavior.
More recently, Wells Fargo launched a splashy marketing campaign that featured a promise by the bank to clean up its act.
But the cg42 findings suggest more work is needed to repair Wells Fargo’s relationship with the public.
“This is about actions speaking louder than words,” Beck said, “and making sure the people who are responsible for creating this culture are no longer part of it.”
Otherwise, Wells Fargo customers could decide to simply walk away.