Investors definitely aren’t stoked by the deafening silence coming from Tesla after its chief executive announced in a tweet that he plans to drop a fat sack of cash on public shareholders in a bid to take the company private.

Tesla’s shares have tumbled from their post-tweet highs as investors are now left with the embers of what is increasingly looking like a Musk-induced pipe dream to lift the economic burdens the company faces by delisting it.

At the close of the market Tesla shares were down $17.89, to $352.45, basically erasing the gains it had earned based on speculation of an acquirer at a $420 price tag. 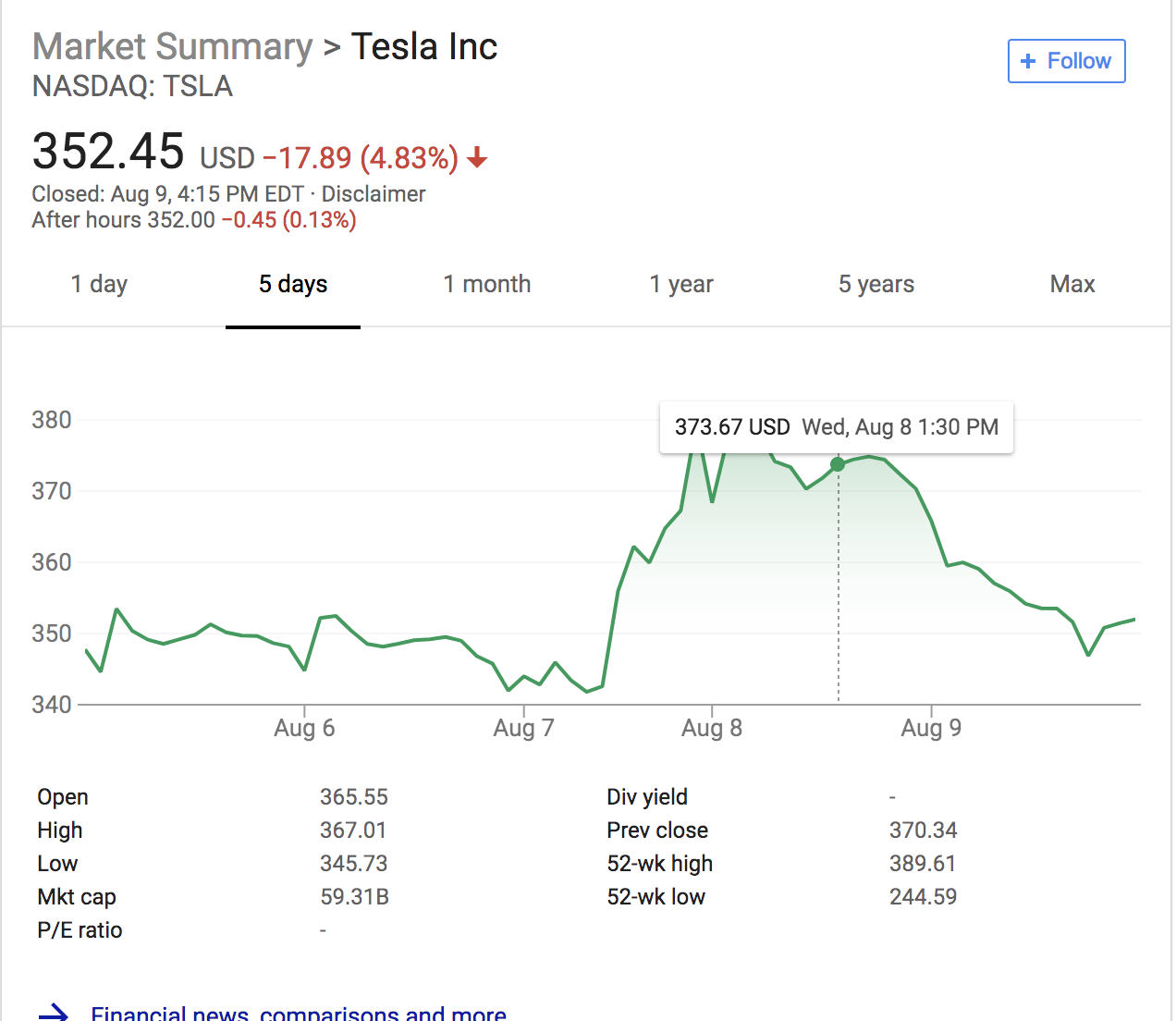 Days after Tesla chief executive Elon Musk tweeted a $420 per share buyout offer for the company, no new details have emerged and several potential contenders for Tesla’s white knight have basically said “It wasn’t me.”

Reports from The New York Times, Axios and Bloomberg indicate that none of the likely buyers — the private equity firms, multinational banks, sovereign wealth funds or SoftBank — had approached or been approached by Tesla about the take-private transaction.

Dan Primack reported in Axios that “it’s none of the usual suspects on the debt side (i.e. big Wall Street banks). Nor many on the equity side, such as big strategics (not Apple or Uber), private equity (not KKR, Mithril, Silver Lake, TPG, etc.) nor deeper financial pockets (not SoftBank or Mubadala).”

That’s kind of everyone that would be involved in what would be the biggest take-private deal in history (Primack valued Tesla at around $85 billion including debt).

Indeed, the New York Times noted that Wall Street banks are only now looking at ways to get in on the action.

From the Times’ report:

Executives at banks including Goldman Sachs and Citigroup are discussing ways a deal could be structured, angling to land the potentially prestigious assignment of taking the maker of electric cars off public markets, according to people familiar with the discussions. Bankers and lawyers on Wall Street said any deal is likely to be valued at $10 billion to $20 billion.

The $20 billion figure, far lower than what would be required for full privatization, assumes that Tesla is only looking to reduce the number of shareholders on its cap table so that it is no longer required to list on a major exchange. The argument is that with fewer shareholders, the company would not be subject to the whims of short sellers as easily as it is on the open markets.

That’s the publicly stated rationale that Musk has given for his desire to take the company private.

While some speculate about what Elon may have been smoking when he made his (potential) bid public on Twitter, SEC regulators are more concerned with whether he’d told investors he had a quality deal instead of just shake.

Clouding the picture is the large stake that Saudi Arabia’s investment fund had taken in the company right before Musk baked short sellers’ positions with the buyout tweet and the promise of financing.

Some conspiracy-minded speculators on HackerNews even theorized that the tweet was an attempt to forestall a hostile takeover from the Saudis.

Allegedly @elonmusk is in a race to avoid a hostile takeover of @tesla from the Saudi’s https://t.co/qTyIZz9AxH pic.twitter.com/MYxJwrfiOm

No matter the rationale, Musk may have more to worry about than just Tesla’s stock price should more detailed plans of the financing not materialize. The Securities and Exchange Commission is knocking, and they don’t take too kindly to the practice of defrauding investors.